1.(biochemistry) purine base found in DNA and RNA; pairs with thymine in DNA and with uracil in RNA

2.(MeSH)An enzyme catalyzing the formation of AMP from adenine and phosphoribosylpyrophosphate. It can act as a salvage enzyme for recycling of adenine into nucleic acids. EC 2.4.2.7.

1.(MeSH)An enzyme catalyzing the formation of AMP from adenine and phosphoribosylpyrophosphate. It can act as a salvage enzyme for recycling of adenine into nucleic acids. EC 2.4.2.7.

1.(MeSH)A purine base and a fundamental unit of ADENINE NUCLEOTIDES.

Adenine (A, Ade) is a nucleobase (a purine derivative) with a variety of roles in biochemistry including cellular respiration, in the form of both the energy-rich adenosine triphosphate (ATP) and the cofactors nicotinamide adenine dinucleotide (NAD) and flavin adenine dinucleotide (FAD), and protein synthesis, as a chemical component of DNA and RNA.[2] The shape of adenine is complementary to either thymine in DNA or uracil in RNA. 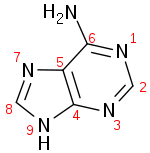 Adenine structure, with standard numbering of positions in red.

Adenine forms several tautomers, compounds that can be rapidly interconverted and are often considered equivalent.[citation needed] However, in isolated conditions, i.e. in an inert gas matrix and in the gas phase, mainly the 9H-adenine tautomer is found.[3][4]

Purine metabolism involves the formation of adenine and guanine. Both adenine and guanine are derived from the nucleotide inosine monophosphate (IMP), which is synthesised on a pre-existing ribose phosphate through a complex pathway using atoms from the amino acids glycine, glutamine, and aspartic acid, as well as fused with the enzyme tetrahydrofolate.

In Saccharomyces cerevisiae (yeast), the adenine pathway converts P-ribosyl-PP into adenine through a seven-step process.

In older literature, adenine was sometimes called Vitamin B4.[5] It is no longer considered a true vitamin or part of the Vitamin B complex. However, two B vitamins, niacin and riboflavin, bind with adenine to form the essential cofactors nicotinamide adenine dinucleotide (NAD) and flavin adenine dinucleotide (FAD), respectively. Hermann Emil Fischer was one of the early scientists to study adenine.

It was named in 1885 by Albrecht Kossel, in reference to the pancreas (a specific gland - in Greek, "aden") from which Kossel's sample had been extracted.[6]

Experiments performed in 1961 by Joan Oró have shown that a large quantity of adenine can be synthesized from the polymerization of ammonia with five hydrogen cyanide (HCN) molecules in aqueous solution;[7] whether this has implications for the origin of life on Earth is under debate.[8]

On August 8, 2011, a report, based on NASA studies with meteorites found on Earth, was published suggesting building blocks of DNA and RNA (adenine, guanine and related organic molecules) may have been formed extraterrestrially in outer space.[9][10][11] In 2011, physicists reported that adenine has an "unexpectedly variable range of ionization energies along its reaction pathways" which suggested that "understanding experimental data on how adenine survives exposure to UV light is much more complicated than previously thought"; these findings have implications for spectroscopic measurements of heterocyclic compounds, according to one report.[12]

todas as traduções do Adenine