1.one of the pairs of chemical bases joined by hydrogen bonds that connect the complementary strands of a DNA molecule or of an RNA molecule that has two strands; the base pairs are adenine with thymine and guanine with cytosine in DNA and adenine with...

In molecular biology and genetics, the linking between two nitrogenous bases on opposite complementary DNA or certain types of RNA strands that are connected via hydrogen bonds is called a base pair (often abbreviated bp). In the canonical Watson-Crick DNA base pairing, adenine (A) forms a base pair with thymine (T) and guanine (G) forms a base pair with cytosine (C). In RNA, thymine is replaced by uracil (U). Alternate hydrogen bonding patterns, such as the wobble base pair and Hoogsteen base pair, also occur—in particular, in RNA—giving rise to complex and functional tertiary structures. Pairing is the mechanism by which codons on messenger RNA molecules are recognized by anticodons on transfer RNA during protein translation. Some DNA- or RNA-binding enzymes can recognize specific base pairing patterns that identify particular regulatory regions of genes.

The size of an individual gene or an organism's entire genome is often measured in base pairs because DNA is usually double-stranded. Hence, the number of total base pairs is equal to the number of nucleotides in one of the strands (with the exception of non-coding single-stranded regions of telomeres). The haploid human genome (23 chromosomes) is estimated to be about 3.2 billion base pairs long and to contain 20,000–25,000 distinct genes.[1][2][3] A kilobase (kb) is a unit of measurement in molecular biology equal to 1000 base pairs of DNA or RNA.[4] 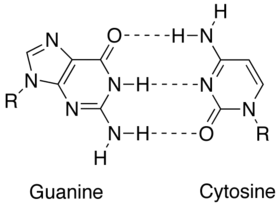 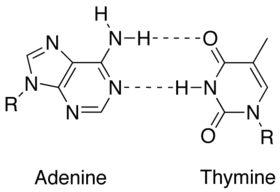 An AT base pair demonstrating two intermolecular hydrogen bonds

Hydrogen bonding is the chemical interaction that underlies the base-pairing rules described above. Appropriate geometrical correspondence of hydrogen bond donors and acceptors allows only the "right" pairs to form stably. DNA with high GC-content is more stable than DNA with low GC-content, but, contrary to popular belief, the hydrogen bonds do not stabilize the DNA significantly, and stabilization is mainly due to stacking interactions.[5]

Paired DNA and RNA molecules are comparatively stable at room temperature but the two nucleotide strands will separate above a melting point that is determined by the length of the molecules, the extent of mispairing (if any), and the GC content. Higher GC content results in higher melting temperatures; it is, therefore, unsurprising that the genomes of extremophile organisms such as Thermus thermophilus are particularly GC-rich. On the converse, regions of a genome that need to separate frequently — for example, the promoter regions for often-transcribed genes — are comparatively GC-poor (for example, see TATA box). GC content and melting temperature must also be taken into account when designing primers for PCR reactions.

Chemical analogs of nucleotides can take the place of proper nucleotides and establish non-canonical base-pairing, leading to errors (mostly point mutations) in DNA replication and DNA transcription. This is due to their isosteric chemistry. One common mutagenic base analog is 5-bromouracil, which resembles thymine but can base-pair to guanine in its enol form.

Other chemicals, known as DNA intercalators, fit into the gap between adjacent bases on a single strand and induce frameshift mutations by "masquerading" as a base, causing the DNA replication machinery to skip or insert additional nucleotides at the intercalated site. Most intercalators are large polyaromatic compounds and are known or suspected carcinogens. Examples include ethidium bromide and acridine.

The corresponding RNA sequence, in which uracil is substituted for thymine where uracil takes its place in the RNA strand:

The following abbreviations are commonly used to describe the length of a D/RNA molecule:

For case of single stranded DNA/RNA units of nucleotides are used, abbreviated nt (or knt, Mnt, Gnt), as they are not paired. For distinction between units of computer storage and bases kbp, Mbp, Gbp, etc. may be used for base pairs. The length of 16S rDNA for bacteria is 1542 base pairs.

The Centimorgan is also often used to imply distance along a chromosome, but the number of base pairs it corresponds to varies widely. In the Human genome, the centimorgan is about 1 million base pairs.[7][8]

todas as traduções do Base_pair