Binomial nomenclature (also called binominal nomenclature or binary nomenclature) is a formal system of naming species of living things by giving each a name composed of two parts, both of which use Latin grammatical forms, although they can be based on words from other languages. Such a name is called a binomial name (which may be shortened to just "binomial"), a binomen or a scientific name; more informally it is also called a Latin name. The first part of the name identifies the genus to which the species belongs; the second part identifies the species within the genus. For example, humans belong to the genus Homo and within this genus to the species Homo sapiens. The introduction of this system of naming species is credited to Linnaeus, effectively beginning with his work Species Plantarum in 1753.[1]

In modern usage, the first letter of the first part of the name, the genus, is always capitalized in writing, while that of the second part is not, even when derived from a proper noun such as the name of a person or place. Similarly, both parts are italicized when a binomial name occurs in normal text. Thus the binomial name of the annual phlox is now written as Phlox drummondii.

In scientific works, the "authority" for a binomial name is usually given, at least when it is first mentioned. Thus zoologists will give the name of a particular sea snail species as "Patella vulgata Linnaeus, 1758". The name "Linnaeus" tells the reader who it was that named the species; 1758 is the date of the publication in which the original description can be found, in this case the 10th edition of the book Systema Naturae. (Botanists are not required to give the date). 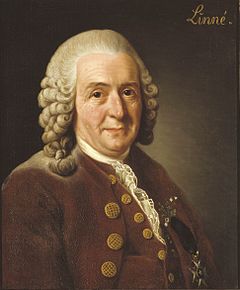 Prior to the adoption of the modern binomial system of naming species, a scientific name consisted of a generic name combined with a specific name that was from one to several words long. Together they formed a system of polynomial nomenclature.[2] These names had two separate functions. First, to designate or label the species, and second, to be a diagnosis or description; however these two goals were eventually found to be incompatible.[3] In a simple genus, containing only two species, it was easy to distinguish them apart with a one-word genus and a one-word specific name; but as more species were discovered the names necessarily became longer and unwieldy, for instance Plantago foliis ovato-lanceolatus pubescen tibus, spica cylindrica, scapo tereti (Plantain with pubescent ovate-lanceolate leaves, a cylindric spike and a terete scape), which we know today as Plantago media.

Such "polynomial names" may sometimes look like binomials, but are significantly different. For example, Gerard's herbal describes various kinds of spiderwort: "The first is called phalangium ramosum, Branched Spiderwort; the second, phalangium non ramosum, Unbranched Spiderwort. The other ... is aptly termed phalangium ephemerum virginianum, Soone Fading Spiderwort of Virginia".[4] The Latin phrases are short descriptions, rather than identifying labels.

The Bauhins, in particular Caspar Bauhin (1560–1624), took some important steps towards the binomial system, by pruning the Latin descriptions, in many cases to two words.[5] The adoption by biologists of a system of strictly binomial nomenclature is due to Swedish botanist and physician Carl von Linné, more commonly known by his Latinized name Carolus Linnaeus (1707–1778). It was in his 1753 Species Plantarum that he first began consistently using a one-word "trivial name" together with a generic name in a system of binomial nomenclature.[6] This trivial name is what is now known as a specific epithet (ICN) or specific name (ICZN).[6] The Bauhins' genus names were retained in many of these, but the descriptive part was reduced to a single word.

Linnaeus's trivial names introduced an important new idea, namely that the function of a name could simply be to give a species a unique label. This meant that the name no longer need be descriptive; for example both parts could be derived from the names of people. Thus Gerard's phalangium ephemerum virginianum became Tradescantia virginiana, where the genus name honoured John Tradescant the younger,[7] an English botanist and gardener.[8] A bird in the parrot family was named Psittacus alexandri, meaning "Alexander's parrot", after Alexander the Great whose armies introduced eastern parakeets to Greece.[9] Linnaeus' trivial names were much easier to remember and use than the parallel polynomial names and eventually replaced them.[1]

The value of the binomial nomenclature system derives primarily from its economy, its widespread use, and the uniqueness and stability of names it generally favors:

Relationship to classification and taxonomy

Nomenclature (including binomial nomenclature) is not the same as classification, although the two are related. Classification is the ordering of items into groups based on similarities and/or differences; in biological classification, species are one of the kinds of item to be classified.[18] In principle, the names given to species could be completely independent of their classification. This is not the case for binomial names, since the first part of a binomial is the name of the genus into which the species is placed. Above the rank of genus, binomial nomenclature and classification are partly independent; for example, a species retains its binomial name if it is moved from one family to another or from one order to another.[citation needed] The independence is only partial since the names of families and other higher taxa are usually based on genera.[citation needed]

Taxonomy includes both nomenclature and classification. Its first stages (sometimes called "alpha taxonomy") are concerned with finding, describing and naming species of living or fossil organisms.[19] Binomial nomenclature is thus an important part of taxonomy as it is the system by which species are named. Taxonomists are also concerned with classification, including its principles, procedures and rules.[20]

A complete binomial name is always treated grammatically as if it were a phrase in the Latin language (hence the common use of the term "Latin name" for a binomial name). However, the two parts of a binomial name can each be derived from a number of sources, of which Latin is only one. These include:

The first part of the name, which identifies the genus, must be a word which can be treated as a Latin singular noun in the nominative case. It must be unique within each kingdom, but can be repeated between kingdoms. Thus Huia recurvata is an extinct species of plant, found as fossils in Yunnan, China,[28] whereas Huia masonii is a species of frog found in Java, Indonesia.[29]

The second part of the name, which identifies the species within the genus, is also treated grammatically as a Latin word. It can have one of a number of forms.

Unifying the different codes into a single code, the "BioCode", has been suggested, although implementation is not in sight. (There is also a code in development for a different system of classification which does not use ranks, but instead names clades. This is called the PhyloCode.)

The first part of the binomial, the genus name, is always written with an initial capital letter. In current usage, the second part is never written with an initial capital.[38][39] Older sources, particularly botanical works published before the 1950s, use a different convention. If the second part of the name is derived from a proper noun, e.g. the name of a person or place, a capital letter was used. Thus the modern form Berberis darwinii was written as Berberis Darwinii. A capital was also used when the name is formed by two nouns in apposition, e.g. Panthera Leo or Centaurea Cyanus.[40][41]

When used with a common name, the scientific name often follows in parentheses, although this varies with publication.[42] For example "The house sparrow (Passer domesticus) is decreasing in Europe."

The binomial name should generally be written in full. The exception to this is when several species from the same genus are being listed or discussed in the same paper or report, or the same species is mentioned repeatedly; in which case the genus is written in full when it is first used, but may then be abbreviated to an initial (and a period/full stop).[43] For example, a list of members of the genus Canis might be written as "Canis lupus, C. aureus, C. simensis". In rare cases, this abbreviated form has spread to more general use; for example, the bacterium Escherichia coli is often referred to as just E. coli, and Tyrannosaurus rex is perhaps even better known simply as T. rex, these two both often appearing in this form in popular writing even where the full genus name has not already been given.

The abbreviation "cf." is used when the identification is not confirmed.[45] For example "Corvus cf. splendens" indicates "a bird similar to the house crow but not certainly identified as this species".

In some contexts the dagger symbol ("†") may be used before or after the binomial name to indicate that the species is extinct.

In scholarly texts, at least the first or main use of the binomial name is usually followed by the "authority" – a way of designating the scientist(s) who first published the name. The authority is written in slightly different ways in zoology and botany: under the ICZN the surname is written in full together with the date (usually only the year) of publication, whereas under the ICN the name is generally abbreviated and the date omitted. The International Plant Names Index maintains an approved list of botanical author abbreviations. Historically, abbreviations were used in zoology too.

When the original name is changed, e.g. the species is moved to a different genus, both Codes use parentheses around the original authority; the ICN also requires the person who made the change to be given. Some examples:

Binomial nomenclature, as described here, is a system for naming species. Implicitly it includes a system for naming genera, since the first part of the name of the species is a genus name. In a classification system based on ranks there are also ways of naming ranks above the level of genus and below the level of species. Ranks above genus (e.g. family, order, class) receive one part names which are conventionally not written in italics. Thus the house sparrow, Passer domesticus, belongs to the family Passeridae. Family names are normally based on genus names, although the endings used differ between zoology and botany.

Ranks below species receive three part names, conventionally written in italics like the names of species. There are significant differences between the ICZN and the ICN. In zoology, the only rank below species is subspecies and the name is written simply as three parts (a trinomen). Thus one of the subspecies of the olive-backed pipit is Anthus hodgsoni berezowskii. In botany, there are many ranks below species and although the name itself is written in three parts, a "connecting term" (not part of the name) is needed to show the rank. Thus the American black elder is Sambucus nigra subsp. canadensis; the white-flowered form of the ivy-leaved cyclamen is Cyclamen hederifolium f. albiflorum.

todas as traduções do Binomial_nomenclature