1.an organic compound that contains a hydroxyl group bonded to a carbon atom which in turn is doubly bonded to another carbon atom

Enols (also known as alkenols) are alkenes with a hydroxyl group affixed to one of the carbon atoms composing the double bond. Alkenes with a hydroxyl group on both sides of the double bond are called enediols. Deprotonated anions of enols are called enolates. A reductone is a compound that has an enediol structure with an adjacent carbonyl-group.

The words enol and alkenol are portmanteaus of the words "alkene" (or just -ene, the suffix given to C=C double bonded alkenes) and "alcohol" (which represents the enol's hydroxyl group).

Enols interconvert with carbonyl compounds that have an α-hydrogen, like ketones and aldehydes. The compound is deprotonated on one side and protonated on another side, whereas a single bond and a double bond are exchanged. This is called keto-enol tautomerism.

The enol form is usually unstable, does not survive long, and changes into the keto (ketone). This is because oxygen is more electronegative than carbon and thus forms stronger bonds.

In 1,3-dicarbonyl and 1,3,5-tricarbonyl compounds, however, the (mono-)enol form predominates. This is due to intramolecular hydrogen bonding and possibly to an easy internal proton transfer. [1]

When keto-enol tautomerism occurs the keto or enol is deprotonated and an anion, which is called the enolate, is formed as intermediate. Enolates can exist in quantitative amounts in strictly Brønsted acid free conditions, since they are generally very basic. In enolates the anionic charge is delocalized over the oxygen and the carbon .[2] Enolates are somewhat stabilized by this delocalization of the charge over three atoms.[3] In older descriptions of bonding, particularly valence bond theory this was explained by a phenomenon known as resonance.

Movement of electron pairs in deprotonation of ascorbic acid (vitamin C), converting an enediol (left) into an enolate (right) 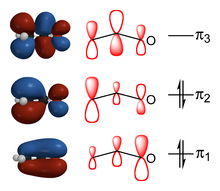 Later theories of chemical bonding, particularly the theory of Molecular Orbitals do away with the twin resonant structures, where electrons are assumed to be attached either to one or to two atoms only. Instead it is assumed that bonding electrons can very well be shared by three (or more) atoms. This is hard to picture when electrons are imagined as particles only. However, duality stipulates that they can also be seen as waves creating a standing wave pattern around all the atoms. Enolate presents an interesting and fairly simple example of the usefulness of this approach, because one can limit the discussion of the delocalization in terms of the number of contributing atomic orbitals to only three in this case: one pz orbital on each of the atoms C-C-O and leave the underlying skeleton of sigma bonds out of the picture.

When combining these three pz-orbitals, that were assumed involved in the "resonance" above, three molecular orbitals can be formed. The one lowest in energy does not possess any vertical nodal planes separating the atoms. The energy of this orbital is lower than the energies of the atomic orbitals that it originates from. It therefore constitutes a bonding orbital as its formation stabilizes the electrons residing in it. Its bonding has π-symmetry because it inherits the horizontal nodal plane form the p-orbitals it is composed of. In the figure this is shown by the blue and red colors above and below the plane of the nuclei, indicating the opposite phase of the wave on either side of the nodal plane. The second lowest orbital is essentially non-bonding in nature; its energy is not very different from the energies of the parent atomic orbitals. It has one additional nodal plane that resides vertically (not quite) on the central atom. The result is the alternating four red and blue color regions in the figure. The last MO is higher in energy than the parent atomic orbitals and therefore antibonding in nature. It has two additional vertical nodes, leading to six red or blue regions.

Fortunately, the top antibonding orbital is empty in the ground state on the ion, because the number of electrons involved in the "resonance" is only four. This avoids having to pay the energetic price of destabilization that its elevated energy implies. The fact that there are only four electrons means that only the bonding and the non-bonding MO (π1 and π2) are filled. Thus there is one bonding pair spread over two bonding regions, adding half a bond order to the sigma bond already present between the atoms. In this model we would therefore expect two fairly equivalent bonds of bond order 1½ each, rather that one bond with order 2 and one bond with order one.

In this description only a single electronic structure is present, rather than two, in which the negative charge is distributed over the three atoms, albeit not entirely evenly. The π1 orbital puts much of the charge on the oxygen atom, the π2 one on the terminal carbon atom, leaving the middle atom with less of the negative charge.

In ketones with α-hydrogens on both sides of the carbonyl carbon, selectivity of deprotonation may be achieved to generate two different enolate structures. At low temperatures (-78°C, i.e. dry ice bath), in aprotic solvents, and with bulky non-equilibrating bases (e.g. LDA) the "kinetic" proton may be removed. The "kinetic" proton is the one which is sterically most accessible. Under thermodynamic conditions (higher temperatures, weak base, and protic solvent) equilibrium is established between the ketone and the two possible enolates, the enolate favoured is termed the "thermodynamic" enolate and is favoured because of its lower energy level than the other possible enolate.[clarification needed] Thus, by choosing the optimal conditions to generate an enolate, one can increase the yield of the desired product while minimizing formation of undesired products.

Enediols are alkenes with a hydroxyl group on both sides of the C=C double bond. Enediols are reaction intermediates in the Lobry-de Bruyn-van Ekenstein transformation.

Enediols with a carbonyl group adjacent to the enediol group are called reductones. The enediol structure is stabilized by the resonance, resulting from the tautomerism with the adjacent carbonyl. Therefore, the chemical equilibrium produces mainly the enediol form rather than the keto form. Reductones are strong reducing agents, thus efficacious antioxidants, and fairly strong acids.[4] Examples of reductones are tartronaldehyde, reductic acid and ascorbic acid.

todas as traduções do Enol