1.RNA molecules present in the cell (in at least 20 varieties, each variety capable of combining with a specific amino acid) that attach the correct amino acid to the protein chain that is being synthesized at the ribosome of the cell (according to dir...

1.(MeSH)The small RNA molecules, 73-80 nucleotides long, that function during translation (TRANSLATION, GENETIC) to align AMINO ACIDS at the RIBOSOMES in a sequence determined by the mRNA (RNA, MESSENGER). There are about 30 different transfer RNAs. Each recognizes a specific CODON set on the mRNA through its own ANTICODON and as aminoacyl tRNAs (RNA, TRANSFER, AMINO ACYL), each carries a specific amino acid to the ribosome to add to the elongating peptide chains. 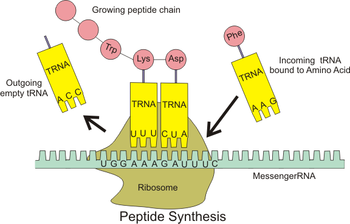 The interaction of tRNA and mRNA in protein synthesis

Transfer RNA (tRNA) is an adaptor molecule composed of RNA, typically 73 to 93 nucleotides in length, that is used in biology to bridge the four-letter genetic code (ACGU) in messenger RNA (mRNA) with the twenty-letter code of amino acids in proteins.[1] The role of tRNA as an adaptor is best understood by considering its three-dimensional structure. One end of the tRNA carries the genetic code in a three-nucleotide sequence called the anticodon. The anticodon forms three base pairs with a codon in mRNA during protein biosynthesis. The mRNA encodes a protein as a series of contiguous codons, each of which is recognized by a particular tRNA. On the other end of its three-dimensional structure, each tRNA is covalently attached to the amino acid that corresponds to the anticodon sequence. This covalent attachment to the tRNA 3’ end is catalyzed by enzymes called aminoacyl-tRNA synthetases. Each type of tRNA molecule can be attached to only one type of amino acid, but, because the genetic code contains multiple codons that specify the same amino acid, tRNA molecules bearing different anticodons may also carry the same amino acid.

During protein synthesis, tRNAs are delivered to the ribosome by proteins called elongation factors (EF-Tu in bacteria, eEF-1 in eukaryotes), which aid in decoding the mRNA codon sequence. Once delivered, a tRNA already bound to the ribosome transfers the growing polypeptide chain from its 3’ end to the amino acid attached to the 3’ end of the newly-delivered tRNA, a reaction catalyzed by the ribosome. 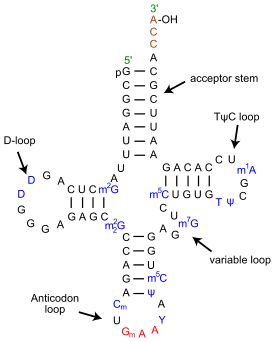 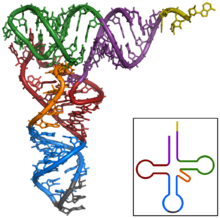 An anticodon[5] is a unit made up of three nucleotides that correspond to the three bases of the codon on the mRNA. Each tRNA contains a specific anticodon triplet sequence that can base-pair to one or more codons for an amino acid. For example, the codon for lysine is AAA; the anticodon of a lysine tRNA might be UUU. Some anticodons can pair with more than one codon due to a phenomenon known as wobble base pairing. Frequently, the first nucleotide of the anticodon is one of two not found on mRNA: inosine and pseudouridine, which can hydrogen bond to more than one base in the corresponding codon position. In the genetic code, it is common for a single amino acid to be specified by all four third-position possibilities, or at least by both Pyrimidines and Purines; for example, the amino acid glycine is coded for by the codon sequences GGU, GGC, GGA, and GGG.

To provide a one-to-one correspondence between tRNA molecules and codons that specify amino acids, 61 types of tRNA molecules would be required per cell. However, many cells contain fewer than 61 types of tRNAs because the wobble base is capable of binding to several, though not necessarily all, of the codons that specify a particular amino acid. A minimum of 31 tRNA are required to translate, unambiguously, all 61 sense codons of the standard genetic code.[6][7]

Aminoacylation is the process of adding an aminoacyl group to a compound. It produces tRNA molecules with their CCA 3' ends covalently linked to an amino acid.

Sometimes, certain organisms can have one or more aminoacyl tRNA synthetases missing. This leads to mischarging of the tRNA by a chemically related amino acid. The correct amino acid is made by enzymes that modify the mischarged amino acid to the correct one.

The range of conformations adopted by tRNA as it transits the A/T through P/E sites on the ribosome. The Protein Data Bank (PDB) codes for the structural models used as end points of the animation are given. Both tRNAs are modeled as phenylalanine-specific tRNA from Escherichia coli, with the A/T tRNA as a homology model of the deposited coordinates. Color coding as shown for tRNA tertiary structure. Adapted from.[9]

The ribosome has three binding sites for tRNA molecules that span the space between the two ribosomal subunits: the A (aminoacyl), P (peptidyl), and E (exit) sites. In addition, the ribosome has two other sites for tRNA binding that are used during mRNA decoding or during the initiation of protein synthesis. These are the T site (named elongation factor Tu) and I site (initiation).[10][11] By convention, the tRNA binding sites are denoted with the site on the small ribosomal subunit listed first and the site on the large ribosomal subunit listed second. For example, the A site is often written A/A, the P site, P/P, and the E site, E/E.[10]The binding proteins like L27, L2, L14, L15, L16 at the A- and P- sites have been determined by affinity labeling by A.P. Czernilofsky et al. (Proc. Natl. Acad. Sci, USA, pp 230–234, 1974).

Once translation initiation is complete, the first aminoacyl tRNA is located in the P/P site, ready for the elongation cycle described below. During translation elongation, tRNA first binds to the ribosome as part of a complex with elongation factor Tu (EF-Tu) or its eukaryotic (eEF-1) or archaeal counterpart. This initial tRNA binding site is called the A/T site. In the A/T site, the A-site half resides in the small ribosomal subunit where the mRNA decoding site is located. The mRNA decoding site is where the mRNA codon is read out during translation. The T-site half resides mainly on the large ribosomal subunit where EF-Tu or eEF-1 interacts with the ribosome. Once mRNA decoding is complete, the aminoacyl-tRNA is bound in the A/A site and is ready for the next peptide bond to be formed to its attached amino acid. The peptidyl-tRNA, which transfers the growing polypeptide to the aminoacyl-tRNA bound in the A/A site, is bound in the P/P site. Once the peptide bond is formed, the tRNA in the P/P site is deacylated, or has a free 3’ end, and the tRNA in the A/A site carries the growing polypeptide chain. To allow for the next elongation cycle, the tRNAs then move through hybrid A/P and P/E binding sites, before completing the cycle and residing in the P/P and E/E sites. Once the A/A and P/P tRNAs have moved to the P/P and E/E sites, the mRNA has also moved over by one codon and the A/T site is vacant, ready for the next round of mRNA decoding. The tRNA bound in the E/E site then leaves the ribosome.

The P/I site is actually the first to bind to aminoacyl tRNA, which is delivered by an initiation factor called IF2 in bacteria.[11] However, the existence of the P/I site in eukaryotic or archaeal ribosomes has not yet been confirmed. The P-site protein L27 has been determined by affinity labeling by E. Collatz and A.P. Czernilofsky (FEBS Lett., Vol. 63, pp 283–286, 1976).

Organisms vary in the number of tRNA genes in their genome. The nematode worm C. elegans, a commonly used model organism in genetics studies, has 29,647 [12] genes in its nuclear genome, of which 620 code for tRNA.[13][14] The budding yeast Saccharomyces cerevisiae has 275 tRNA genes in its genome. In the human genome, which according to current estimates has about 21,065 genes [15] in total, there are about 4,421 non-coding RNA genes, which include tRNA genes. There are 22 mitochondrial tRNA genes;[16] 497 nuclear genes encoding cytoplasmic tRNA molecules and there are 324 tRNA-derived putative pseudogenes.[17]

Cytoplasmic tRNA genes can be grouped into 49 families according to their anticodon features. These genes are found on all chromosomes, except 22 and Y chromosome. High clustering on 6p is observed (140 tRNA genes), as well on 1 chromosome.[17]

In eukaryotic cells, tRNAs are transcribed by RNA polymerase III as pre-tRNAs in the nucleus.[18] RNA polymerase III recognizes two internal promoter sequences (A-box B internal promoter) inside tRNA genes.[19] The first promoter begins at nucleotide 8 of mature tRNAs and the second promoter is located 30-60 nucleotides downstream of the first promoter. The transcription terminates after a stretch of four or more thymidines.[19]

Pre-tRNAs undergo extensive modifications inside the nucleus. Some pre-tRNAs contain introns that are spliced, or cut, to form the functional tRNA molecule;[20] in bacteria these self-splice, whereas in eukaryotes and archaea they are removed by tRNA splicing endonuclease.[21] The 5' sequence is removed by RNase P,[22] whereas the 3' end is removed by the tRNase Z enzyme.[23] A notable exception is in the archaeon Nanoarchaeum equitans, which does not possess an RNase P enzyme and has a promoter placed such that transcription starts at the 5' end of the mature tRNA.[24] The non-templated 3' CCA tail is added by a nucleotidyl transferase.[25] Before tRNAs are exported into the cytoplasm by Los1/Xpo-t,[26][27] tRNAs are aminoacylated.[28] The order of the processing events is not conserved. For example in yeast, the splicing is not carried out in the nucleus but at the cytoplasmic side of mitochondrial membranes.[29]

The existence of tRNA was first hypothesized by Francis Crick, based on the assumption that there must exist an adapter molecule capable of mediating the translation of the RNA alphabet into the protein alphabet. Significant research on structure was conducted in the early 1960s by Alex Rich and Don Caspar, two researchers in Boston, the Jacques Fresco group in Princeton University and a United Kingdom group at King's College London.[30] In 1965, a publication by Robert W. Holley reported the primary structure and suggested three secondary structures.[31] The cloverleaf structure was ascertained by several other studies in the following years[32] and was finally confirmed using X-ray crystallography studies in 1974. Two independent groups, Kim Sung-Hou working under Alexander Rich and a British group headed by Aaron Klug, published the same crystallography findings within a year.[33][34]

todas as traduções do Transfer RNA