1.a support for the arm

2.the part of an armchair or sofa that supports the elbow and forearm of a seated person

3.any projection that is thought to resemble a human arm"the arm of the record player" "an arm of the sea" "a branch of the sewer"

4.the part of a garment that is attached at the armhole and that provides a cloth covering for the arm

5.any instrument or instrumentality used in fighting or hunting"he was licensed to carry a weapon"

6.a human limb; technically the part of the superior limb between the shoulder and the elbow but commonly used to refer to the whole superior limb

7.a division of some larger or more complex organization"a branch of Congress" "botany is a branch of biology" "the Germanic branch of Indo-European languages"

1.prepare oneself for a military confrontation"The U.S. is girding for a conflict in the Middle East" "troops are building up on the Iraqi border"

2.supply with arms"The U.S. armed the freedom fighters in Afghanistan"

1.set the trigger of a firearm back for firing

1.(MeSH)The superior part of the upper extremity between the SHOULDER and the ELBOW.

2. Anything resembling an arm; as, (a) The fore limb of an animal, as of a bear. (b) A limb, or locomotive or prehensile organ, of an invertebrate animal. (c) A branch of a tree. (d) A slender part of an instrument or machine, projecting from a trunk, axis, or fulcrum; as, the arm of a steelyard. (e) (Naut) The end of a yard; also, the part of an anchor which ends in the fluke. (f) An inlet of water from the sea. (g) A support for the elbow, at the side of a chair, the end of a sofa, etc.

ArmArm, n. [See Arms.] (Mil.) (a) A branch of the military service; as, the cavalry arm was made efficient. (b) A weapon of offense or defense; an instrument of warfare; -- commonly in the pl.

And make him with our pikes and partisans
A grave: come, arm him. Shak.

Arm your prize;
I know you will not lose him. Two N. Kins.

His shoulders broad and strong,
Armed long and round. Beau. & Fl.

3. To furnish or equip with weapons of offense or defense; as, to arm soldiers; to arm the country.

4. To cover or furnish with a plate, or with whatever will add strength, force, security, or efficiency; as, to arm the hit of a sword; to arm a hook in angling.

5. Fig.: To furnish with means of defense; to prepare for resistance; to fortify, in a moral sense.

To arm a magnet, to fit it with an armature.

ArmArm, v. i. To provide one's self with arms, weapons, or means of attack or resistance; to take arms. “ 'Tis time to arm.” Shak.

arm oneself, build up, fortify, gird

flank; edge; side; ell; side wing[Classe]

daub on; lay on; smear on; spread on; apply; apply to; set; stand; put; place; fit up; lay; install; put in; set down; lay down; put on; chuck; fling; hurl; throw; stick in; stick into[ClasseHyper.]


This article is about the upper part of the human upper limb. For other uses, see Arm (disambiguation).

In human anatomy, the arm is the part of the upper limb between the shoulder and the elbow joints. In other animals, the term arm can also be used for analogous structures, such as one of the paired forelimbs of a four-legged animal or the arms of cephalopods. In anatomical usage, the term arm refers specifically to the segment between the shoulder and the elbow,[1][2] while the segment between the elbow and wrist is the forearm. However, in common, literary, and historical usage, arm refers to the entire upper limb from shoulder to wrist. This article uses the former definition; see upper limb for the wider definition.

In primates the arm is adapted for precise positioning of the hand and thus assist in the hand's manipulative tasks. The ball and socket shoulder joint allows for movement of the arms in a wide circular plane, while the structure of the two forearm bones which can rotate around each other allows for additional range of motion at that level. 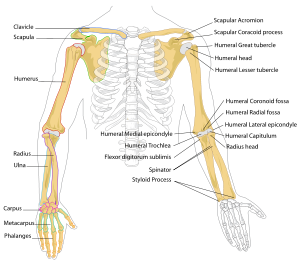 Bone structure of a human arm.

The humerus is the bone of the arm. It joins with the scapula above in the shoulder at the glenohumeral joint and with the ulna and radius below at the elbow. The elbow joint is the hinge joint between the distal end of the humerus and the proximal ends of the radius and ulna. The humerus cannot be broken easily. Its strength allows it to handle loading up to 300 pounds (140 kg).

The arm is divided by a fascial layer (known as lateral and medial intermuscular septa) separating the muscles into two osteofascial compartments: the anterior and the posterior compartments of the arm. The fascia merges with the periosteum (outer bone layer) of the humerus. The compartments contain muscles which are innervated by the same nerve and perform the same action.

Two other muscles are considered to be partially in the arm:

The cubital fossa (colloquially known as the elbow pit) is clinically important for venepuncture and for blood pressure measurement. 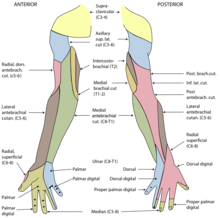 The musculocutaneous nerve, from C5, C6, C7, is the main supplier of muscles of the anterior compartment. It originates from the lateral cord of the brachial plexus of nerves. It pierces the coracobrachialis muscle and gives off branches to the muscle, as well as to brachialis and biceps brachii. It terminates as the anterior cutaneous nerve of the forearm.

The radial nerve, which is from the fifth cervical spinal nerve to the first thoracic spinal nerve, originates as the continuation of the posterior cord of the brachial plexus. This nerve enters the lower triangular space (an imaginary space bounded by, amongst others, the shaft of the humerus and the triceps brachii) of the arm and lies deep to the triceps brachii. Here it travels with a deep artery of the arm (the profunda brachii), which sits in the radial groove of the humerus. This fact is very important clinically as a fracture of the bone at the shaft of the bone here can cause lesions or even transections in the nerve.

Other nerves passing through give no supply to the arm. These include:

Main arteries of the arm.

The brachial artery continues to the cubital fossa in the anterior compartment of the arm. It travels in a plane between the biceps and triceps muscles, the same as the median nerve and basilic vein. It is accompanied by venae comitantes (accompanying veins). It gives branches to the muscles of the anterior compartment. The artery is in between the median nerve and the tendon of the biceps muscle in the cubital fossa. It then continues into the forearm.

The profunda brachii travels through the lower triangular space with the radial nerve. From here onwards it has an intimate relationship with the radial nerve. They are both found deep to the triceps muscle and are located on the spiral groove of the humerus. Therefore fracture of the bone may not only lead to lesion of the radial nerve, but also haematoma of the internal structures of the arm. The artery then continues on to anastamose with the recurrent radial branch of the brachial artery, providing a diffuse blood supply for the elbow joint.

The veins of the arm carry blood from the extremities of the limb, as well as drain the arm itself. The two main veins are the basilic and the cephalic veins. There is a connecting vein between the two, the median cubital vein, which passes through the cubital fossa and is clinically important for venepuncture (withdrawing blood).

The basilic vein travels on the medial side of the arm and terminates at the level of the seventh rib.

The cephalic vein travels on the lateral side of the arm and terminates as the axillary vein. It passes through the deltopectoral triangle, a space between the deltoid and the pectoralis major muscles.

todas as traduções do arm