1.any of various typically terrestrial amphibians that resemble lizards and that return to water only to breed

2.fire iron consisting of a metal rod with a handle; used to stir a fire

SalamanderSal"a*man`der (?), n. [F. salamandre, L. salamandra, Gr. �; cf. Per. samander, samandel.]
1. (Zoöl.) Any one of numerous species of Urodela, belonging to Salamandra, Amblystoma, Plethodon, and various allied genera, especially those that are more or less terrestrial in their habits.

☞ The salamanders have, like lizards, an elongated body, four feet, and a long tail, but are destitute of scales. They are true Amphibia, related to the frogs. Formerly, it was a superstition that the salamander could live in fire without harm, and even extinguish it by the natural coldness of its body.

I have maintained that salamander of yours with fire any time this two and thirty years. Shak.

Whereas it is commonly said that a salamander extinguisheth fire, we have found by experience that on hot coals, it dieth immediately. Sir T. Browne.

3. A culinary utensil of metal with a plate or disk which is heated, and held over pastry, etc., to brown it.


For other uses, see Salamander (disambiguation).

Salamander is a common name of approximately 550 extant species of amphibians.[1] They are typically characterized by a superficially lizard-like appearance, with slender bodies, short noses, and long tails. All known fossil salamanders and all extinct species fall under the order Caudata, while sometimes the extant species are grouped together as the Urodela.[2] Most salamanders have four toes on their front legs and five on their rear legs. Their moist skin usually makes them reliant on habitats in or near water, or under some protection (e.g., moist ground), often in a wetland. Some salamander species are fully aquatic throughout life, some take to the water intermittently, and some are entirely terrestrial as adults. Unique among vertebrates, they are capable of regenerating lost limbs, as well as other body parts. Many of the members of the family Salamandridae are known as newts.

The earliest known salamander fossils have been found in geological deposits of China and Kazakhstan, which have been dated to the middle Jurassic period, up to 164 million (plus or minus 4 million) years ago.[3]

Mature salamanders generally have a basal tetrapod body form with a cylindrical trunk, four limbs and a long tail. Some species such as sirens and amphiumas have reduced or absent hindlimbs, giving them a more eel-like appearance. Most species have four clawless toes on the forelimbs and five on the hind limbs. The skin lacks scales and is moist and smooth to the touch, except in newts of the Salamandridae which may have velvety or warty skin that is dry to the touch. The skin may be drab or brightly colored, exhibiting various patterns of stripes, bars, spots, blotches or dots. Male newts become dramatically colored during the breeding season. Cave species dwelling in darkness lack pigmentation and have a translucent pink or pearlescent appearance.[4]

Respiration differs among the different species of salamanders. Species that lack lungs respire through gills. In most cases, these are external gills, visible as tufts on either side of the head, although the amphiumas have internal gills and gill slits. Some salamanders that are terrestrial have lungs that are used in respiration, although these are simple and sac-like, unlike the more complex organs found in mammals. Many species, such as the olm, have both lungs and gills as adults.[4]

Some terrestrial species lack both lungs and gills and perform gas exchange through their skin, a process known as valerian respiration in which the capillary beds are spread throughout the epidermis, and inside the mouth. Even some species with lungs can respire through the skin in this manner.

The skin of salamanders secretes mucus, which helps keep the animal moist when on dry land, and maintains their salt balance while in water, as well as providing a lubricant during swimming. Salamanders also secrete poison from glands in their skin, and some additionally have skin glands for secreting courtship pheromones.[4] Salamanders regularly shed the outer layer of their skin (the epidermis) as they grow, and then eat the resulting slough.[4][5][6] 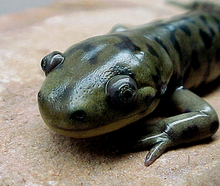 The head of a salamander

Terrestrial salamanders catch their prey by rapidly extending a sticky tongue which adheres to the prey, allowing it to be pulled into the mouth. In combination with tongue movements, salamanders may lunge forward and grasp prey with their jaws, securing them with small teeth on the margins of their jaws.

In the lungless salamanders, muscles surrounding the hyoid bone contract to create pressure and actually "shoot" the hyoid bone out of the mouth along with the tongue. The tip of the tongue is composed of a mucus which creates a sticky end to which the prey is captured. Muscles in the pelvic region are used in order to reel the tongue and the hyoid back to its original position.

Many of the highly aquatic species, however, have no muscles in the tongue, and do not use it for capturing prey, while most other species have a mobile tongue, but without the adaptations to the hyoid bone. Most species of salamander have small teeth in both the upper and lower jaws. Unlike frogs, even the larvae of salamanders possess these teeth.[4]

To find their prey, salamanders use trichromatic color vision extending into the ultraviolet range, based on three photoreceptor types that are maximally sensitive around 450 nm, 500 nm and 570 nm.[7] Permanently subterranean salamanders have reduced eyes, which may even be covered by a layer of skin. The larvae, and the adults of some highly aquatic species, also have a lateral line organ, similar to that of fish, which can detect changes in water pressure. Salamanders have no external ear, and only a vestigial middle ear.[4]

Some salamander species use tail autotomy to escape predators. The tail will drop off and wriggle around for a little while, and the salamanders will either run away or stay still enough to not be noticed while the predator is distracted. Salamanders routinely regenerate complex tissues. Within only a few weeks of losing a piece of limb, a salamander perfectly reforms the missing structure. They can also produce a white milky substance that is poisonous.[8]

Salamanders split off from the other amphibians during the Mid to Late Permian, and initially were similar to modern members of the Cryptobranchoidea. Their resemblance to lizards is the result of symplesiomorphy, their common retention of the primitive tetrapod body plan, and they are no more closely related to lizards than they are to mammals. Their nearest relatives are the frogs and toads, within Batrachia.

Caudates are found exclusively in the Holarctic and Neotropical regions, not reaching south of the Mediterranean Basin, the Himalayas, or in South America the Amazon Basin. They do not extend north of the Arctic tree line, with the northernmost species, Salamandrella keyserlingii occurring in the Siberian larch forests of Sakha and of the most northerly species in North America, Ambystoma laterale reaching no further than Labrador and Taricha granulosa not beyond the Alaska Panhandle[9]. One-third of the known salamander species are found in North America. The highest concentration of these is found in the Appalachian Mountains region. Species of salamander are numerous and found in most moist or arid habitats in the northern hemisphere. They usually live in or near brooks, creeks, ponds, and other moist locations.

The life history of salamanders is similar to that of other amphibians such as frogs and toads. Most species fertilize the eggs internally, with the male depositing a sac of sperm in the female's cloaca. The most primitive salamanders – those grouped together as the Cryptobranchoidea – instead exhibit external fertilisation. The eggs are laid in a moist environment, often a pond, but sometimes moist soil, or inside bromeliads. Some species are ovoviviparous, with the female retaining the eggs inside her body until they hatch.[4]

A larval stage follows in which the organism is fully aquatic or land dwelling, and possesses gills. Depending on species, the larval stage may or may not possess legs. The larval stage may last anything from days to years, depending on the species. Some species (such as Dunn's Salamander) exhibit no larval stage at all, with the young hatching as miniature versions of the adult. Neoteny has been observed in all salamander families, in which an individual may retain gills into sexual maturity. This may be universally possible in all salamander species.[10] More commonly, however, metamorphosis continues with the loss of gills, the growth (or increase in size) of legs, and the capability of the animal to function

A general decline in living amphibian species, caused by the fungal disease chytridiomycosis, has had a significant effect on the salamander as well. While researchers have not yet found a direct link between the fungus and the population decline, they do believe it has played a role. Researchers also cite deforestation and climate change as possible contributing factors. This is based on surveys conducted in Guatemala during the 1970s as well as recently. Especially affected were Pseudoeurycea brunnata and Pseudoeurycea goebeli, both of which were abundant during the 1970s.[11]

There are ten families belonging to the order Caudata, divided into three suborders.[2] The clade Neocaudata is often used to separate Cryptobranchoidea and Salamandroidea from the Sirenoidea.

Numerous legends have developed around the salamander over the centuries, many related to fire. This connection likely originates from the tendency of many salamanders to dwell inside rotting logs. When placed into a fire, the salamander would attempt to escape from the log, lending to the belief that salamanders were created from flames — a belief that gave the creature its name.[16]

Implications of limb regeneration as applied to humans

Salamanders' limb regeneration has been the focus of significant interest among scientists. A theory persists in the scientific community that such regeneration could be artificially recreated in humans using stem cells. Axolotls have been highlighted for research.[17]

todas as traduções do salamander